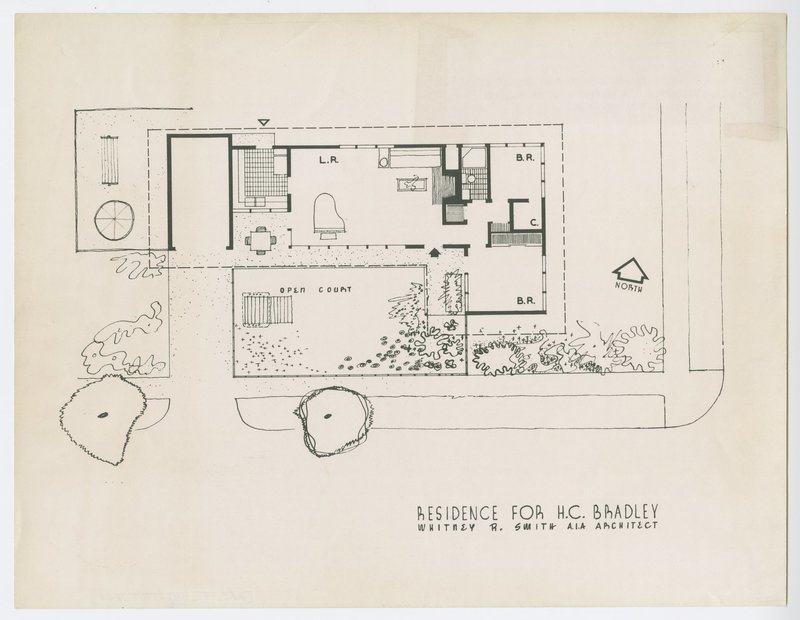 The Harold Bradley house in Pasadena makes maximum use of a small lot, by yielding a small area to the driveway and garage, but reserving the focal point for a garden terrace. The terrace provides garden views and access for all the major rooms of the house through glass doors and windows. Though placed at the front of the house, privacy was created by effective use of a translucent plastic wall and the natural topography of the site-- the house sits on a slight rise above the street. Wide roof overhangs, up to eight feet, provide shelter to the south and west facing rooms. By including only the essentials for a small house, Smith created an original space for living that was tailored to the site. The Bradley house was widely praised and published in architecture magazines at the time. 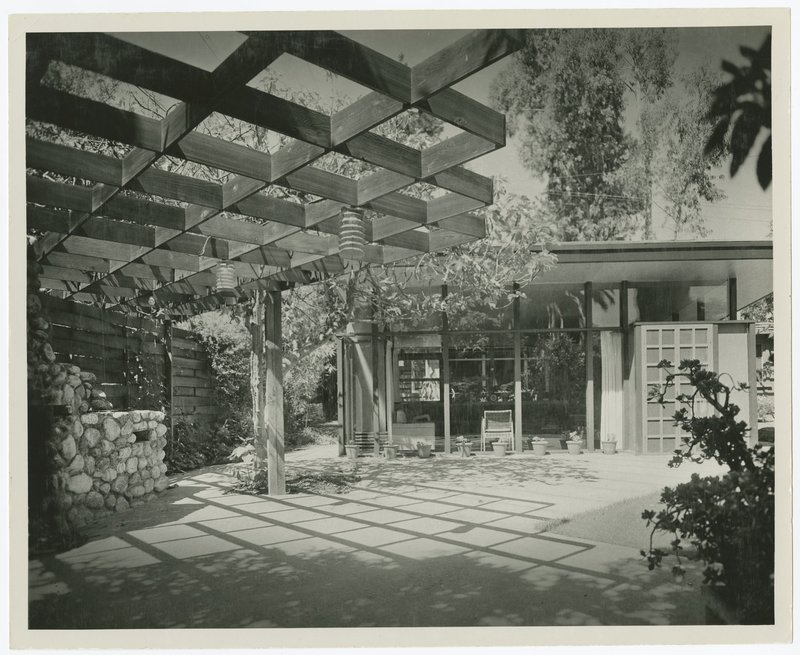 Smith’s own house began as a garage on a piece of land that had been part of a larger residential property. He wrote about the house in a letter to an editor at the Ladies Home Journal in 1948: “The garden walls and landscaping positively define the total limits of view so that. . . the actual view is about 75 feet, interrupted only by vertical columns and planting. . . .Space means nothing unless defined. Openness means little unless there also is closure.”

The Smith house, an unpretentious amalgamation of additions, in which the layers of transparency from inside to outside create a spaciousness that is real despite the modest size of the house. 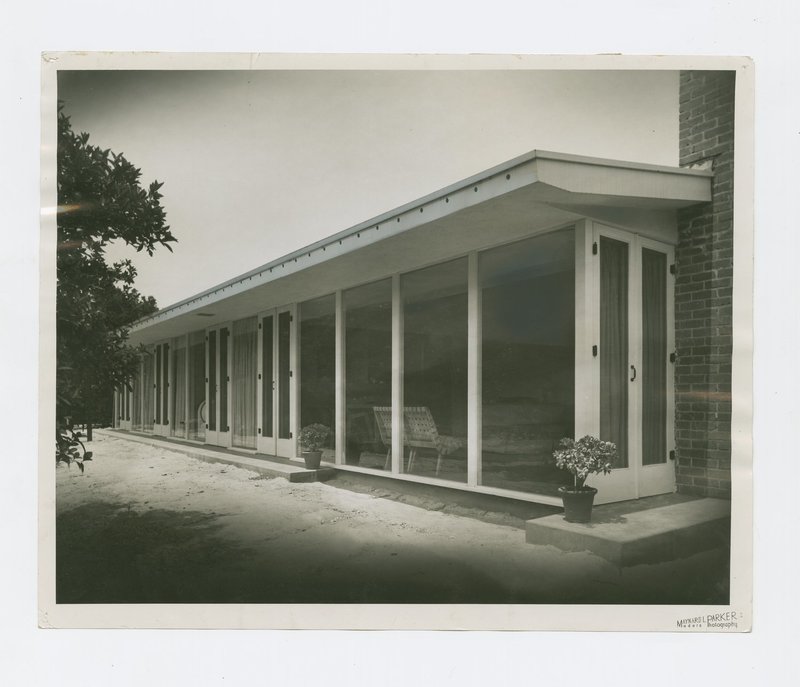 For the long, narrow, 1300 square foot house for Leo Zwell, Smith designed a straight line of rooms, with each one having a full wall of glass facing onto the brick terrace. A "light trough" or linear skylight provided natural light to the living/dining room ceiling.

Because economy was a driving concern, construction materials were concrete and plaster, with minimal amounts of wood and maximum windows and glazed doors. Like the Bradley house, the Zwell house was praised and published widely as an example of a gracious design on an average budget. 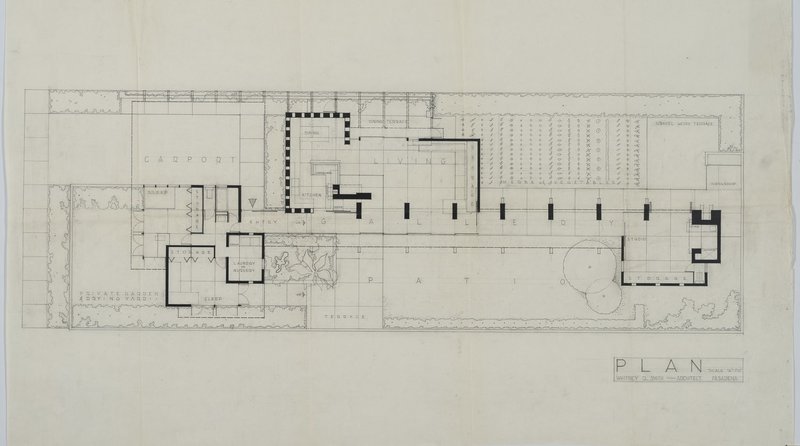 In 1944-1945 the Barr Lumber Company invited three architects to design model houses for an unbuilt experiment and engaged landscape architect Garrett Eckbo to create gardens for each of the proposals. Whitney Smith submitted an extensive entry, writing in part:

"The problem of modern architecture is not to make slicker, shinier, more synthetic surfaces but to find the way to reintegrate the man with his environment. It is widely thought by both laymen and some architects that the ultimate modern house will be all glass with some steel or concrete to hold it up... This house is a natively modern dissention from that view. It is an attempt to use space-- and the materials that define that space-- openly, freely, honestly, to help articulate the patterns that Americans in every section of the country are themselves developing as their own, and to reformulate the patterns that are characteristic of Southern California."

Between 1944 and 1946, John Entenza, the editor of Arts & Architecture magazine, invited Whitney Smith to design two Case Study Houses for lots in La Canada Flintridge. These designs, published in the magazine, ensured Smith a place in the pantheon of high art modernists, which in turn enhanced his reputation among those interested in modern design. 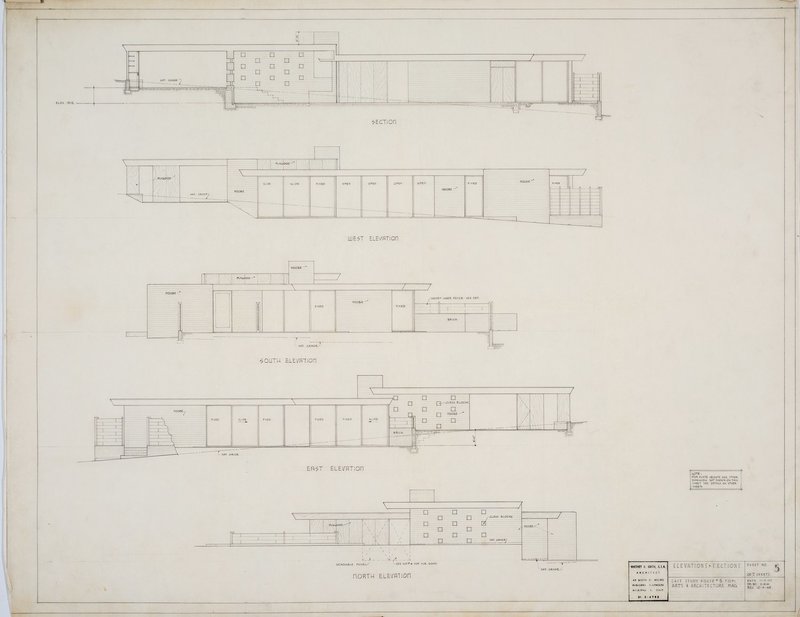 Case Study House #5 by Whitney Smith was an un-built project-- also known as the Loggia House. The central feature of this 1800 square foot house was the living room which could be expanded or contracted with the use of sliding glass walls and sliding screens. This loggia portion of the home could thus be considered both an inside and an outside room, depending upon use and position of the screens.

The walls of the house were to be constructed of adobe brick, framed in steel to make the walls light, insulated, and strong. The materials and design of the house were specifically created to showcase the indoor-outdoor living potential of the Southern California climate-- the adobe would have provided insulating properties during the hot summers in the San Gabriel foothills. 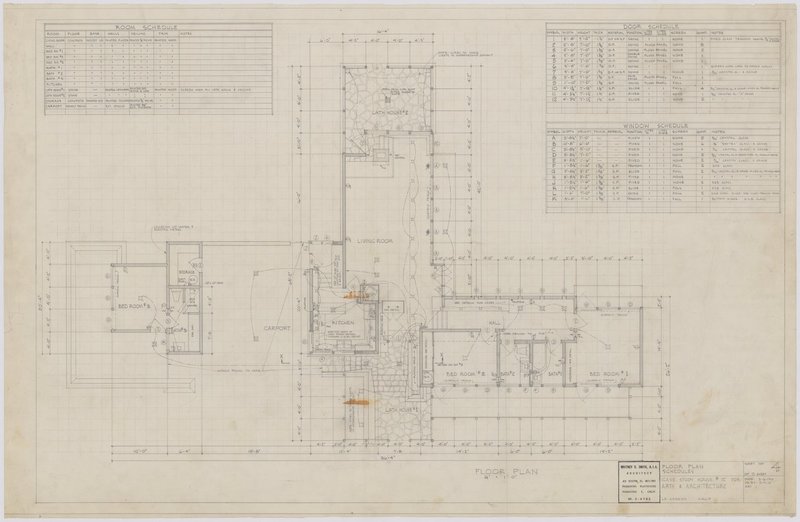 Case Study House #12 (also known as the Lath House) was an un-built project from architect Whitney Smith. This house, similar in some ways to his previous house project (CSH #5), was designed by Smith to house horticulturists. As such, a lath house was attached to the front of the house, and the X shape of the house allowed all rooms to have access to the garden areas surrounding the house. An additional lath or greenhouse was places at the far end of the living room, raised several feet above floor level, to provide a view of plants on display.

This design, while particular in this instance to gardeners, could also be adapted and modified to include different rooms for an array of hobbies and home-based professions. The recognition that large scale tract housing filled a need, but was not an exact fit for every family is exemplified in this design. 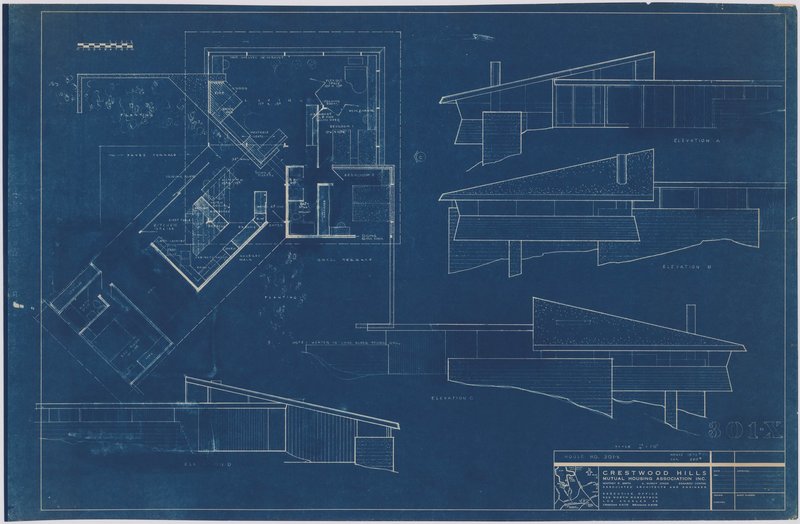 Shortly after Williams joined Smith's office as an associate (in 1947-1948), a collaborative called the Mutual Housing Association selected Whitney Smith, A. Quincy Jones, and Edgardo Contini, apparently from the pages of Arts & Architecture magazine, to design 500 houses on land in Brentwood, north of Sunset Boulevard. The members of the Association formed the collaborative in order to leverage their buying power and enable each family to build a modern house.

The Association wanted the community to be integrated, unfortunately restrictive covenants were standard practice in Los Angeles and the community faced other obstacles including the Federal Housing Authority. Eventually 82 houses were built, though many were destroyed in a 1961 wildfire.

Smith and his firm were responsible for design and construction supervison, Jones was responsible for site planning, and Contini for engineering. This collaborative venture was the beginning of the idea for the Community Facilities Planners group.