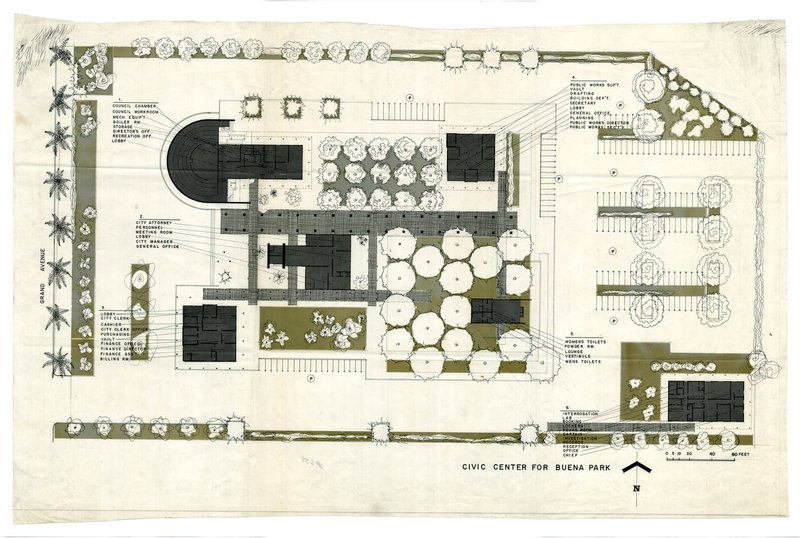 The scale of Smith and Williams’s public buildings and civic projects ranges from a single church to a government center, from a neighborhood park to a new town. Even within one building type there is great variety. When interviewed in the mid-1970s about the firm’s work, Whitney Smith was adamant that they had not had a style —“No style, just good.” What they were doing was solving problems by designing particular structures for specific sites and needs. 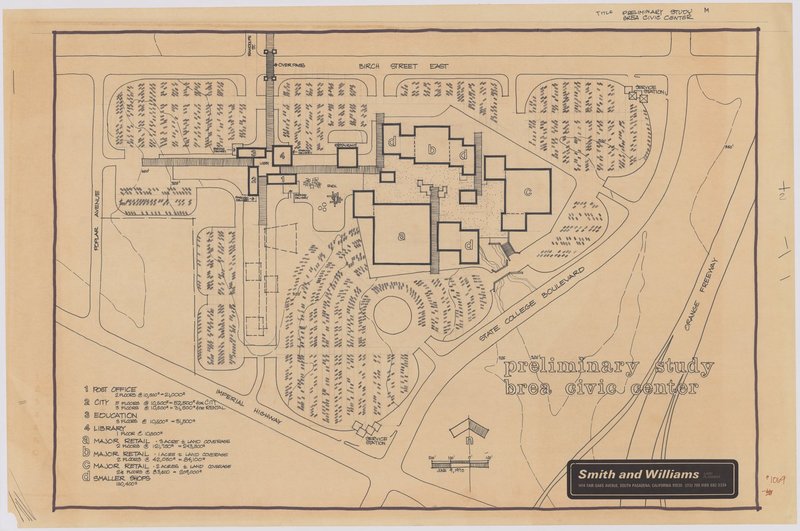 By the 1970s, planning formed the bulk of the firm’s work. They produced master plans for colleges and universities, urban redevelopment, transportation centers, suburban towns, and recreation facilities. Most of the planning projects were done with other members of Community Facilities Planners.

Though ideas in planning have changed and some of the firm’s projects may look dated today, both Smith and Williams were skilled and imaginative professionals. Williams wrote Recreation Places in 1958; Smith was a member of the American Institute of Certified Planners. More significantly, they thought like planners. They approached every design project from a planning perspective, so that even a single building is rooted to a physical and social context. 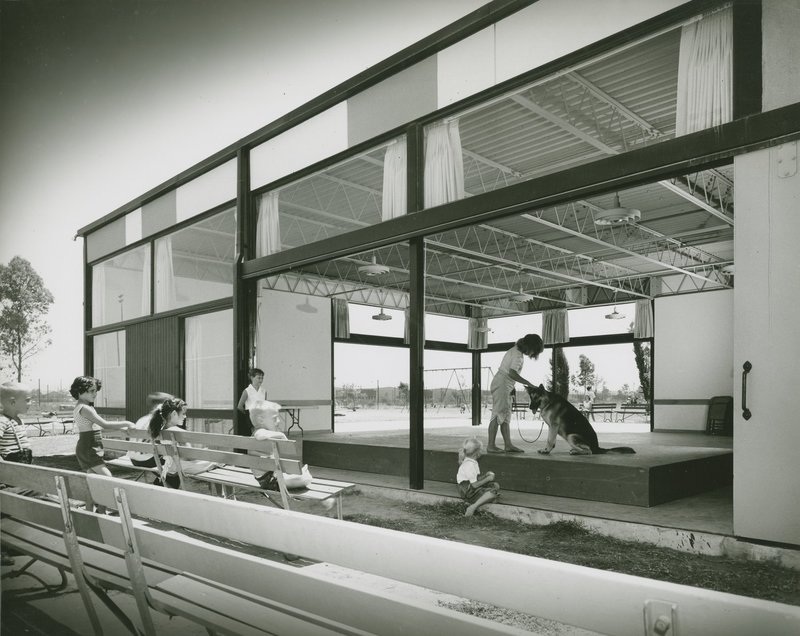 Community Facilities Planners, with Garrett Eckbo and his associates taking the lead with landscape architecture work, worked with the city of Lakewood to create a series of parks over a ten year span. Smith and Williams designed several parks and park buildings, including the youth activity building and a picnic pavilion in Mayfair Park. 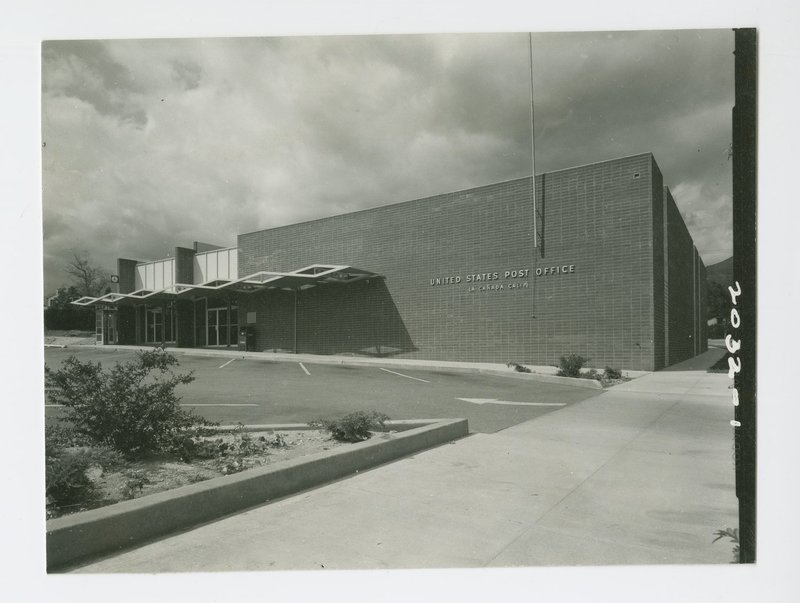 The post office was designed to anchor a small suburban shopping center. A reproduction of a rendering in the archive shows that the decorative folded detail on the façade was to be carried through onto the fronts of the other buildings in the shopping center to tie the buildings together, literally and visually. These types of design details allowed for continuity in planning the urban landscape, which was a Smith and Williams specialty.

Churches became another Whitney Smith specialty; between the 1940s and the early 1970s, he designed more than a dozen church buildings, most in the Pasadena area. 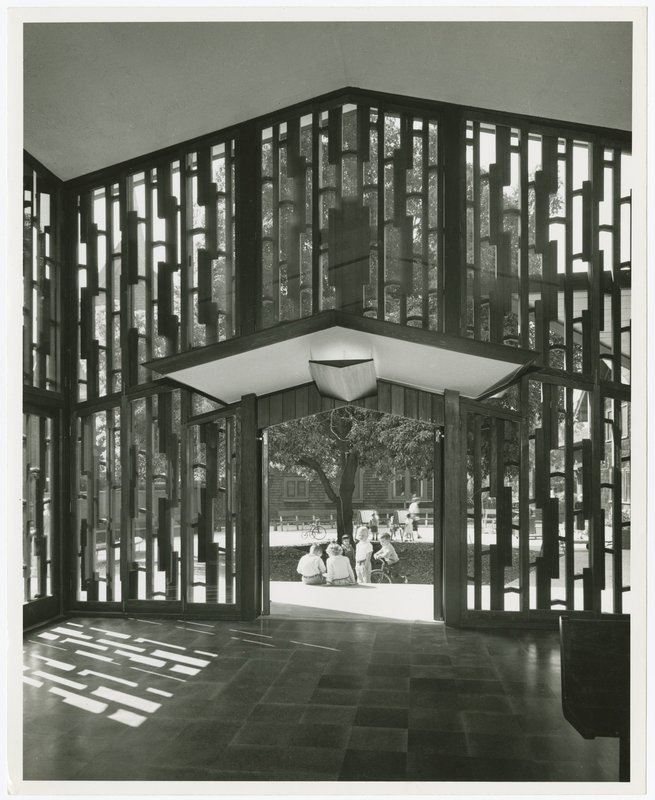 The Neighborhood Church, which first used a sanctuary built in 1887 on South Pasadena Avenue, was forced to move in 1966 to a new location on Westmoreland Place, when the State division of Highways bought the land through eminent domain to construct a highway. The highway was never built, and although the Church had demolished the original 1887 building, they retained the Smith and Williams' designed Children's Chapel (1953) and Religious Education building (1955). The firm designed a sanctuary for the new site, which also included the Greene and Greene Cole house, which Smith repurposed into offices. 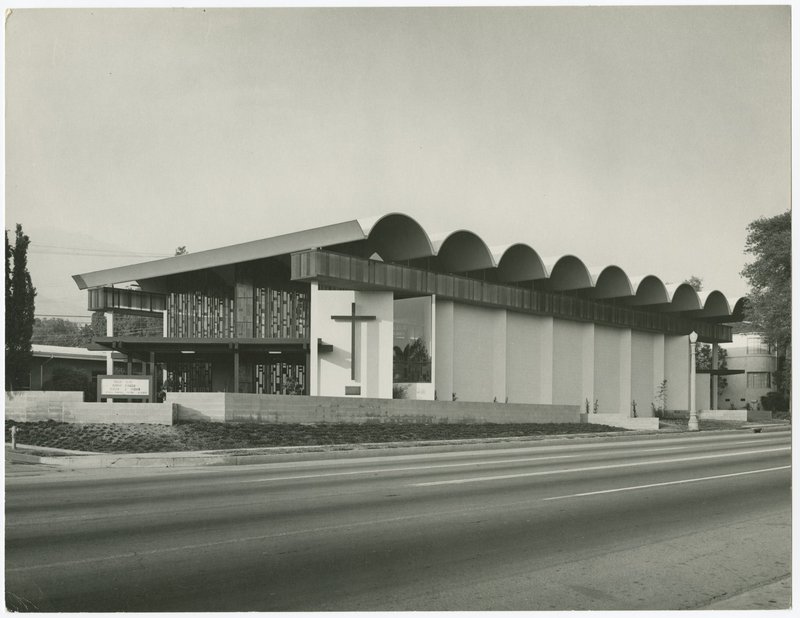 For St. Paul's Lutheran Church in Monrovia, Smith and Williams designed screens made of wood and colored glass which animate the interior spaces. The firm calculated the rhythims of solids and voids for the screens in order to maximize the drama of light and shadow. Smith and Williams created, at the time, the longest unsupported plywood vaults for this church. The clerestories under the vaults are lighted at night, which makes the roof appear to float. 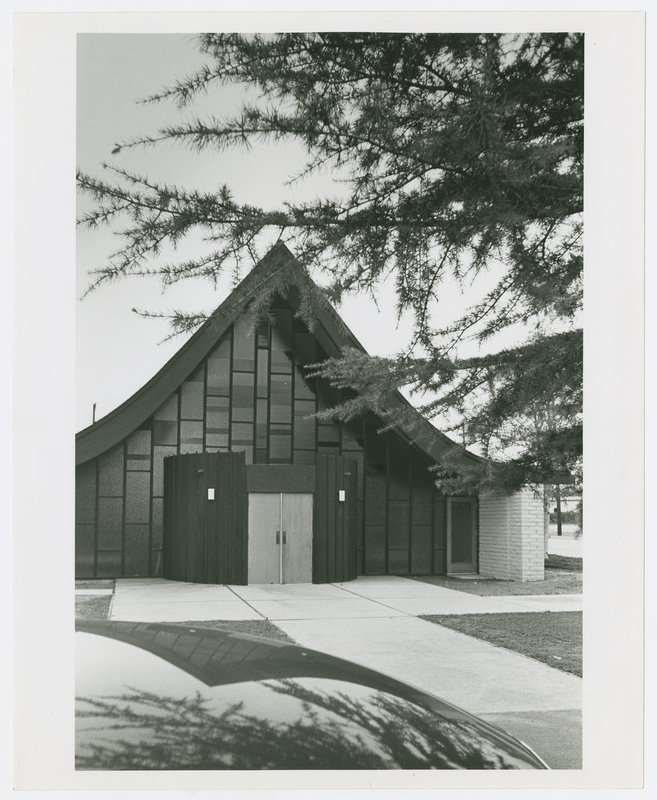 Whitney Smith, the partner in charge, designed a tent-like structure for a new sanctuary, in deference to the Methodist open door philosophy of worship. The interior furnishings, including the cross, communion table and rail, lectern and pulpit were made by furniture designer Sam Maloof. The pews were made by a furniture company from a Maloof prototype.

The community of Sun Valley, California is located in the San Fernando Valley region, just north of the city of Burbank, and is a nighborhood within the city limits of Los Angeles. 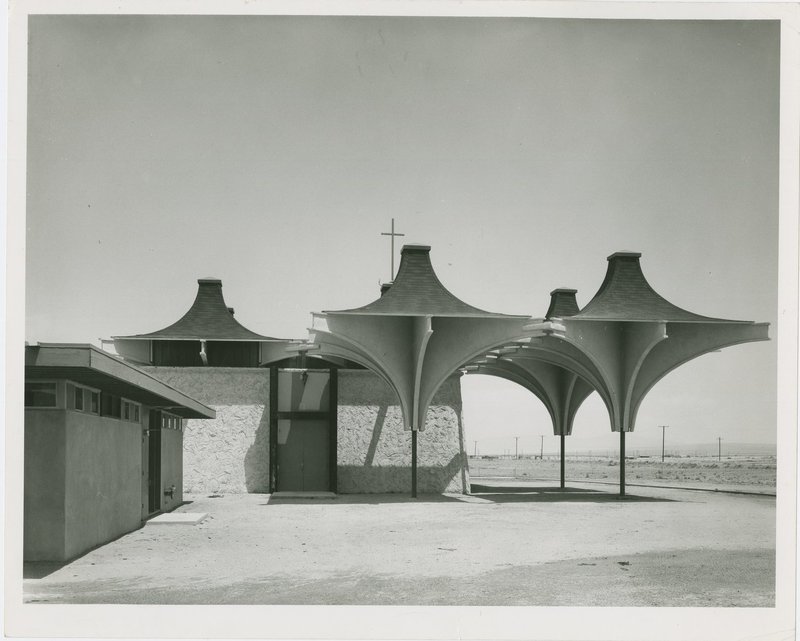 For the master planning of California City, Smith and Williams designed parks, community facilities, tract housing, and a Congregational Church. It's design mirrors the diamond-shaped pavilion in the City Park, and brings architectural continuity to the brand new town.

In his church designs, Whitney Smith brought into consideration both the client needs and the need for consistent urban planning to design "good" buildings. 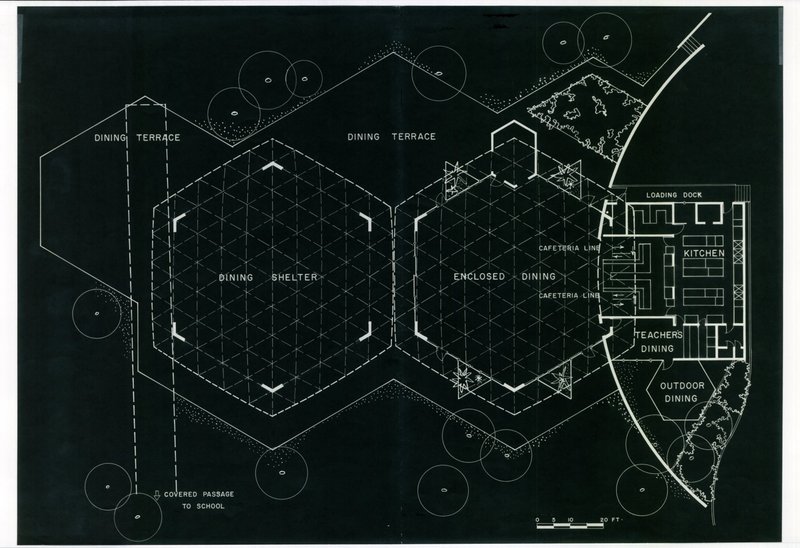 Smith and Williams applied their planning knowledge to projects large and small. For this school cafeteria and playground, they observed how the children interacted with the buildings and each other, and designed a semi-open dining area for the school cafeteria that was connected to the outside. Photographs in the Smith and Williams’s files show the students at John Marshall congregating in groups at the edge of the campus. The design for a new cafeteria gracefully accommodates the students’ energetic sociability with a space that is defined but open. 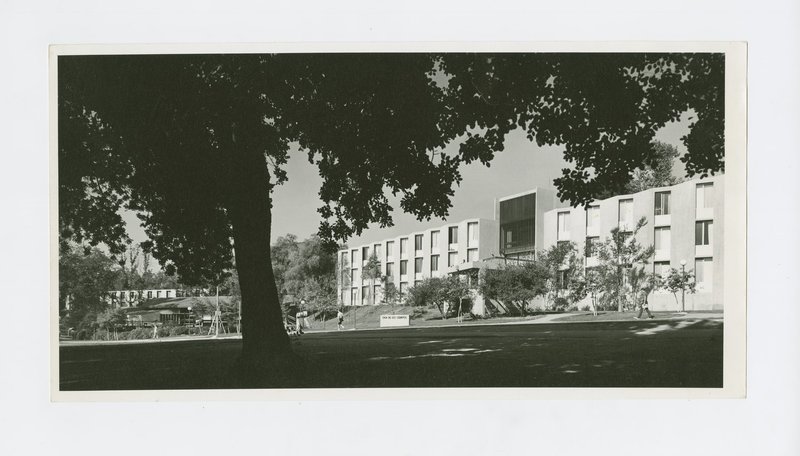 The rapid expansion of colleges and universities in California during the 1950s and 1960s offered many architects the opportunity to design buildings on their brand new campuses. Smith and Williams designed a residence hall, reception center, and cafeteria for the California State Polytechnic University campus at Pomona. 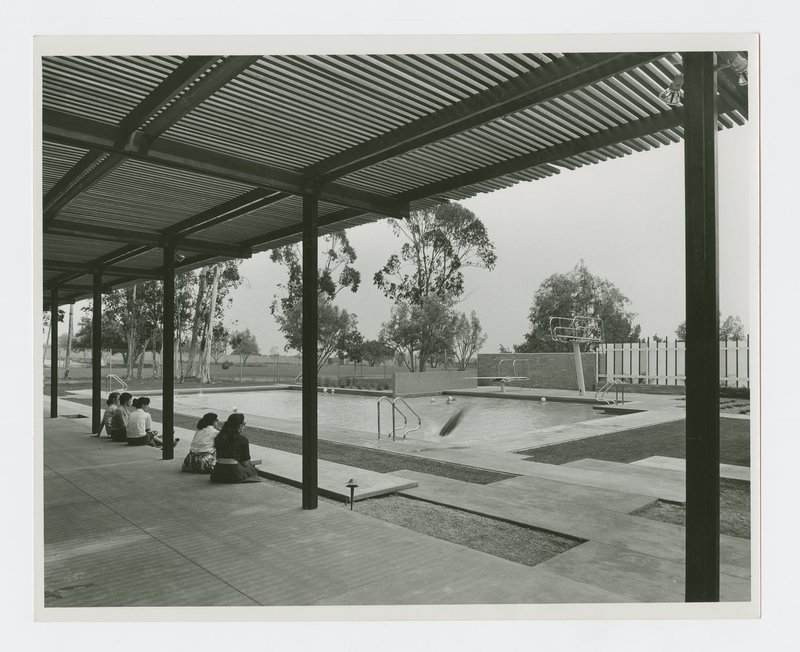 A swimming pool and pavilion for changing and showering at the progressive women's college, Scripps College in Claremont, was originally envisaged in a verdant park. The final building, completed in 1958, is a simple, elegant design with a loggia that faces the swimming pool. 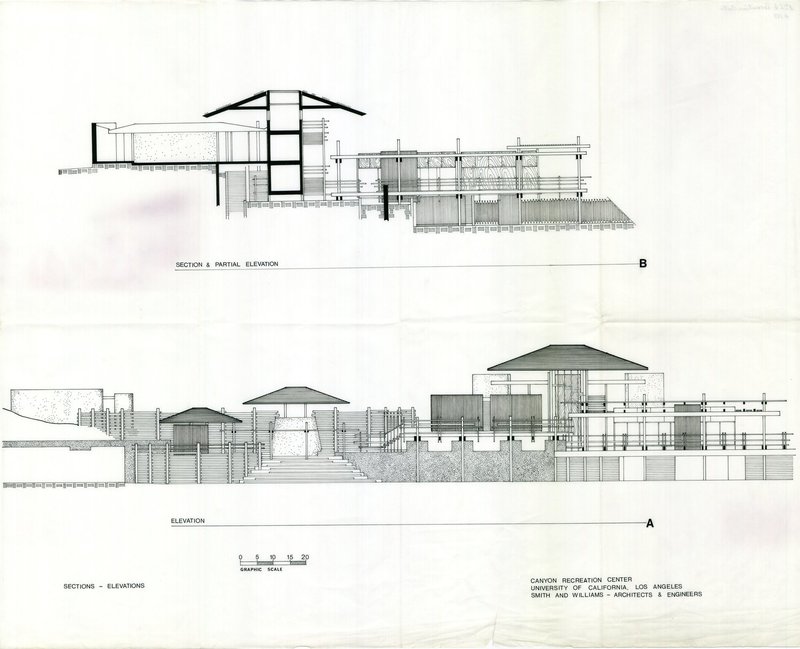 There was a fairly clear division of labor between the two principals in the firm-- Smith took on churches, medical offices, and many residential commissions while Williams was more focused on planning and recreational projects. Williams' 1958 book Recreation Places defined his concepts and designs for outdoor and indoor recreational opportunities.

For the University of California, Los Angeles Sunset Recreation Center, Williams and associate architect Robert Meyerhof, designed a multilevel arrangement of pavilions, decks, and stair landings that met the University's requirement of an open place for recreation, with few physical boundaries to encourage improptu meetings and conversations between faculty and students.

The arc of the work of the Smith and Williams firm reflects the social and economic changes in Southern California from the early postwar years to the recession and oil crisis of the 1970s. Nevertheless, it is fascinating to see these large changes in the context of Southern California's particular history, landscape, and climate manifest in the designs of specific individuals. The early and middle years of Smith and Williams residential, commercial, and planning designs look familiar to us now, but on close examination, still provoke admiration and perhaps surprise for the excellence of the work and the passionate belief in architecture's social value.