George Washington Smith began his career as an artist, then a move to Montecito from Paris in 1916 gave him the chance to build his own house. The Andalusian style was instantly popular, and he began a new career as an architect, designing predominantly Spanish Colonial homes and commercial properties in the Santa Barbara area. Along with his associate, Lutah Maria Riggs, they designed many of the most recognizable Spanish Colonial Revival residences in Santa Barbara.

Born in Pennsylvania on February 22, 1876, George Washington Smith began his education with the study of art and painting at the Pennsylvania Academy of fine arts, and later attended Harvard University (1895-1987) where he studied architecture, but never graduated. After leaving Harvard, Smith took a position supervising construction with Newman, Woodman and Harris, but, unhappy with the work, left to join the Francis R. Welsh bond company, where he made enough money to retire to a life of painting by 1912. After marrying, he travelled through Europe, eventually settling in Paris where he studied painting at the Académie Julian of the Ecole des Beaux Arts. Smith and his wife left Europe in 1914 at the outbreak of World War I, and settled in New York, where he continued to paint and exhibit his work. In 1915, Smith and his wife traveled to California to see one of his paintings exhibited at the Panama Pacific Exposition in San Francisco. While in California, the two decided to take a trip to Santa Barbara.
After seeing Santa Barbara, Smith and his wife made the decision to settle temporarily there to wait out the war, until they could return to Europe. They rented a house in Montecito while Smith built a house for them, later known as the Heberton house, designed to resemble the Spanish farmhouses he had seen in Europe. This house brought George Washington Smith national attention when it appeared in the 1920 issue of Architectural Forum. As his neighbors asked him to build similar houses for them, Smith developed an architectural practice, with the help of Lutah Maria Riggs who joined his office in 1921. Smith became very well known nationally for his Spanish Colonial Revival style. He continued to practice architecture in Santa Barbara until his death in 1930. 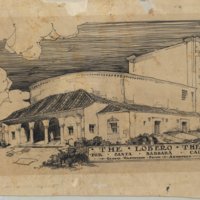 The Lobero Theater on Canon Perdido and Anacapa Streets in downtown Santa Barbara, got its start in the 1870s as a vaudeville house. By the early 1920s, it had fallen into disrepair and Smith was asked to design and build a new theater in the Spanish… 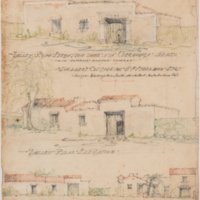 George Fox Steedman was a manufacturing executive from St. Louis who commissioned Smith to work with him on designing and constructing Casa del Herrero (House of the Blacksmith) on East Valley Road in Montecito. They created a house and gardens… 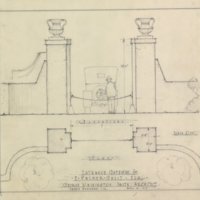 The E. Palmer Gavit residence was originally built in 1919 by Reginald Johnson; Smith designed an addition to the main house, as well as outbuildings. The property was originally named "Cuesta Linda," then "Tanglewood," and eventually Madame Ganna… 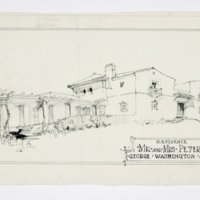 The unincorporated community of Hope Ranch was developed in the early 1920s by the Santa Barbara Estates Inc. company, which was owned by Harold Chase, and Peter Bryce was one of the main stakeholders. Bryce was also one of the early residents, with… 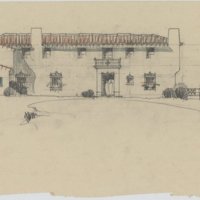 The Malcolm Douglas house on Sycamore Canyon Road in Montecito was completed in 1929, and is also known as Los Suenos ("The Dreams"). Douglas, a New York doctor, and his wife, Rachel Peabody Douglas, had Smith design a house to showcase the view of… 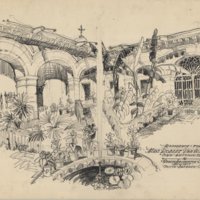 This house for Robert VanWyck Maverick was one of only two houses Smith built in Texas. It was considered one of the best examples of a courtyard-centered house at the time of its construction. The plan for the house was U-shaped, with a fourth wall… 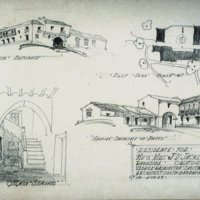 This large Spanish Colonial Revival mansion in the small town of Woodside was built for copper mining magnate Daniel Cowan Jackling and his family. The 17,000 square foot house sat on a 194 acre parcel of land. The property was subdivided and all but… 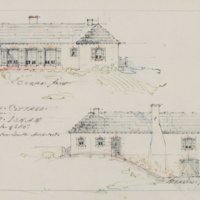 The Carpenteria beach house for Albert Keep Isham was a Moorish inspired estate directly on the beach. Smith also constructed a natatorium, which was done in an "Islamic" style and contained a large number of decorative tiles around the swimming pool… 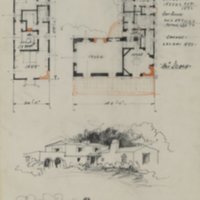 The Wesley Gallagher house was a Smith commission just prior to his death in 1930. The Smith files contain these sketches and drawings (most done in Riggs' hand) for preliminary elevations for the house. The Riggs files contain the actual working… 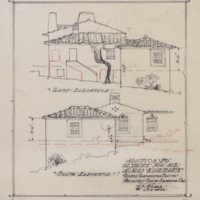 George Washington Smith was commissioned by Alfred Dietrich, an heir to an oil manufacturing fortune who also owned a railroad line, to design servants quarters and a garage for his property on Park Lane. This smaller house was built prior to the… 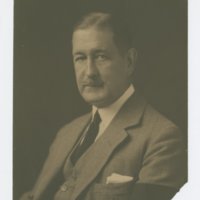 The George Washington Smith portraits are archived in the Lutah Maria Riggs collection; since she was his protege who worked in his firm up until his death in 1930.
View all 11 items