Albert Frey was born in Zurich, Switzerland on October 18, 1903. Frey received his formal architectural training at the Institute of Technology in Winterthur, Switzerland. During his education at the Institute of Technology, Frey apprenticed for two years under the architect A. J. Arter in Zurich. Graduating in 1924, Frey traveled around Europe and settled by 1925 in Brussels where he worked for Jean-Jules Eggericx and Raphael Verwilghen. Leaving Eggericx and Verwilghen in 1927, Frey moved to France where he worked as a draftsman for Le Corbusier and Pierre Jeanneret. In 1930, Frey’s visa application was approved and he relocated to New York.
Shortly after arriving in New York, Frey found work with A. Lawrence Kocher with whom he worked until 1935. Kocher and Frey completed four buildings and co-authored many articles on urban planning, the modern aesthetic, and technology for Architectural Record during their partnership. By 1935, Frey had relocated to Palm Springs and began working with architect John Porter Clark. The two formed a partnership, which lasted twenty years. At the beginning of their partnership Clark and Frey operated under the name Van Pelt and Lind Architects, since neither Clark nor Frey was licensed at the time. By 1943, Clark and Frey had become licensed and were able to obtain public commissions which included schools, hospitals and a library. In 1952, Robson C. Chambers who had been an employee with the firm since 1946 was made a partner, and the firm was renamed Clark, Frey and Chambers. During his 63 years in Palm Springs, Frey’s most notable projects include: the Raymond Loewy house, the Guthrie house, the Clark & Frey Office building, the Aerial Tramway and Gas Station, Palm Springs City Hall, the Desert Hospital, the North Shore Yacht Club, Villa Hermosa, Frey House I and II. Frey continued to design buildings into the late 1980s. Albert Frey died on November 14, 1998, at the age of 95. 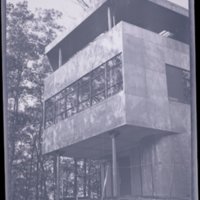 The architect A. Lawrence Kocher was asked to design a house for the Architectural League of New York City and the Allied Arts of Industries bi-annual exhibition. Kocher hired Frey to help design a house that used new materials, like steel and glass… 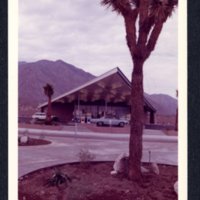 Frey and Chambers designed the Palm Springs Aerial Tramway station house (the building at the base of the mountain) in 1963. The Tramway Gas Station, at the corner of Tramway Road and Highway 111, was constructed in 1965 with a distinctive hyperbolic… 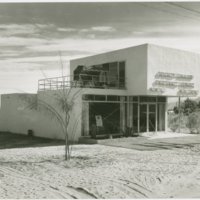 In 1934, Frey was sent to Palm Springs to design and build an office building, with an apartment above, for Dr. J.J. Kocher, the brother of A. Lawrence Kocher. The building was designed to take advantage of the climate and featured a courtyard… 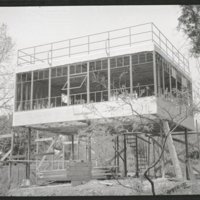 Architects A. Lawrence Kocher and Albert Frey worked together in 1933-1934 to design low-cost structures, like the Aluminaire House. Kocher was the managing editor of Architectural Record, faculty at the University of Virginia and Black Mountain… 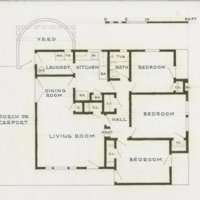 The Bel Vista affordable housing tract was built in 1945 as housing for War workers. The subdivision of 15 homes was designed by Albert Frey and John Porter Clark for the developers Sallie Stevens and Culver Nichols. This was the first subdivision… 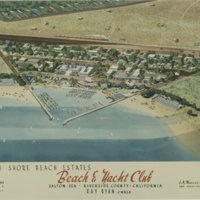 The Salton Sea was a formerly dry lake bed located southeast of Palm Springs. The area was flooded as part of an effort to irrigate the surrounding area in the early 1900s, and is one of the largest lakes in California. It is also one of the saltiest… 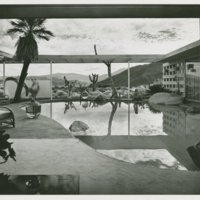 The industrial designer Raymond Loewy commissioned Frey to design a bachelor pad and winter getaway in 1947, in Palm Springs. The small (1100 square feet) house features walls of sliding glass doors opening onto a patio and pool. The outdoor living… 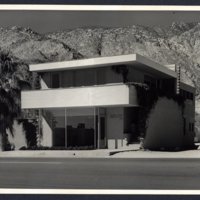 Albert Frey was in partnership with John Porter Clark from 1939 until 1957. This office building was the firm's office on North Palm Canyon Drive in downtown Palm Springs. The unassuming modern two-story building now houses retail stores on its first… 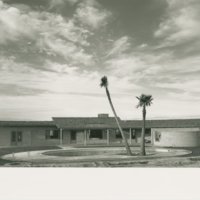 The Adrian Pelletier house in Palm Desert was built as the town was being developed as a getaway for Hollywood stars. Its location near both the Shadow Mountain Club and Marrakesh Country Club was a very desirable location. 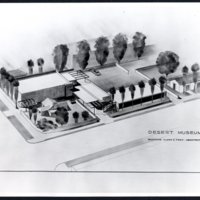 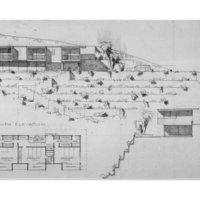 The Harold R. Newton house on Palisades Drive in Palm Springs was a small house perched on the side of a steeply sloping lot. Multiple terraces created a more stable hillside and provided space for an access stairway. 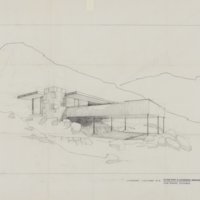 The Raymond Cree house was built on the border of Palm Springs and Cathedral City. Cree was a real estate developer who had originally wanted to build a luxury resort on the site; instead a two bedroom house with pool and valley views was… 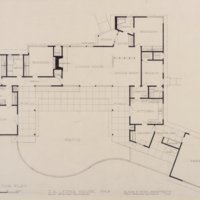 The J.A. Lyons house was a large (5 bedroom), sprawling house in the Smoke Tree Ranch development in Palm Springs. With five bedrooms and four bathrooms, the Lyons house was much more grand than some of Frey's other residences.
View all 13 items