Born in Grand Rapids, Michigan in 1875, Byers studied to become an electrical engineer at the University of Michigan. He went on to complete one year of graduate work at Harvard University before leaving to work as an electrical engineer for the U.S. Commission at the Paris Exposition, from 1900 to 1901. Byers then left Europe to teach linguistics at the North American Academy in Montevideo, Uruguay. By 1910 Byers was back in the United States, employed by Santa Monica High School, as the head of the Modern Language Department.

1919 was a pivotal year for Byers. That year Byers was asked to supervise the construction of an adobe house for his wife’s cousin, Harry Johnson. After Johnson had observed a crew of Mexican craftsman build an adobe church in Ojai, California, he had hired the same builders to construct a house for his family in Brentwood, California. Not being able to speak Spanish posed a challenge for Johnson, so he asked John Byers to oversee the construction. Byers agreed, oversaw the project, and became fascinated with adobes. After this project, at the age of 44, Byers took a leave of absence from Santa Monica High School and began devoting all of his time and energy to studying and building adobe structures. That same year Byers established a kiln and work yard on the Johnson's property in Brentwood, California. There Byers and his crew of craftsman (the same men who built the Johnson adobe) manufactured floor and roof tiles as well as iron and woodwork - all products that were then used in the houses he designed and built. Byers named this operation the John Byers Mexican Handmade Tile Company. By spring of 1922, Byers had officially stepped down from his position at Santa Monica High School and began pursuing architecture full time, advertising his services as John Byers Organization for Design and Building of Latin Homes. That same year, some of the adobe houses he and his craftsman had designed and built were featured in an article entitled "A Revival of Adobe Buildings" published in the April 1922 issue of The Architect and Engineer.

Between 1923 and 1925, Byers enlarged his staff, hired a construction manager and promoted Elda Muir to draftswomen. Elda Muir had been working with Byers since the age of 13, starting as his secretary and as time progressed worked her way up, eventually becoming Byers' associate. By 1926, Byers had earned his architectural license, dropped all building activities and concentrated only on design. To compensate for this shift in responsibilities, Byers enlarged his staff again. At this time Byers residential design also became more diversified. He began to design period homes, such as Spanish Colonial Revival, Monterey Colonial, and French Provincial, among others.

By 1934, Elda Muir, after receiving her license, became Byers' associate. Between 1934 and 1942, the two worked together as Byers and Muir Associated Architects. For the duration of the firm, according to Muir, Byers kept strict control over all design but did little drawing. Usually Byers would execute the preliminary sketches, and after approval from the clients Muir and the rest of Byers's staff completed the rest of the plans. Over the course of his career, Byers designed and built over 200 homes in the southern California region, many in Santa Monica. Before his death in 1966, according to Elda Muir, Byers burned most of his papers and drawings in the early 1960s. What remained was given to the Architecture and Design Collection by Elda Muir. 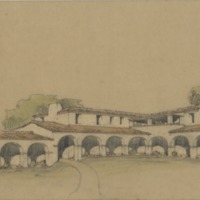 This presentation drawing is similar to other Byers drawings-- with a Spanish Colonial Revival house set amongst lush landscaping. The house features a loggia running the length of the front of the house, with a second story balcony, and all under a… 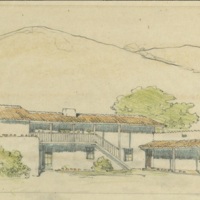 The McLaughlin house, though its location is unknown, is very similar to many of the adobe and Monterey Revival houses Byers designed in the Santa Monica area. With an exterior staircase leading to a second floor balcony, red tile roof, and colorful… 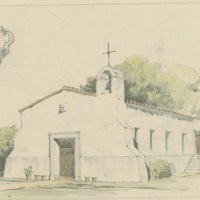 The two very different renderings of the Unitarian Church of Santa Monica highlight the range of styles that John Byers was capable of designing. The first image, a more Spanish Colonial style, was the ultimate choice of the building, which is shown…

The rendering for the Frederick Laue restaurant is an example of Byers' commercial work. While known specifically for residences, he did design a few commercial and civic buildings. A Laue Restaurant was located near the corner of Santa Monica… 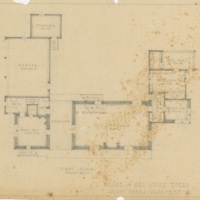 These images are for the first and second floor plans for an early house for Mrs. John Byers. The plans are not dated, and there is no address listed anywhere on the sheets. The thick-lined walls for the living room and first floor bedroom indicate… 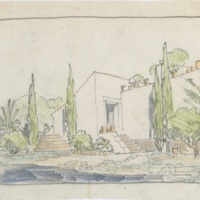 In the John Byers collection, many items are unidentified. Some of the drawings have dates or locations, however the vast majority do not. This pair of images shows the front of an adobe-style house in the first image, and the back of the house in…
View all 6 items