The 13 story Art Deco building on the corner of Broadway and Ninth Street in downtown Los Angeles, was designed and built by Claud Beelman of the firm Curlett & Beelman. The building was built with steel reinforced concrete and is covered in turquoise terra cotta tile, with blue and gold accents, and the upper portion of the building has a clock on all four sides, along with the word EASTERN in white neon.

The Curlett & Beelman firm was formed by Alexander (Aleck) Curlett (1881-1942) and Claud W. Beelman (1884-1963) in 1919. They are well known for their large scale architecture and that the firm planned, designed, and superintended the construction of most of their buildings. Some of their more noted projects, many of which are designated Historic Monuments and/or listed in the National Register of Historic Places, include: Barker Brothers, Elks Temple, Pershing Square Building, Insurance Exchange Building, LA Fur Mart Building, Commercial Club: Hotel Case, Harris Newark Building, Board of Trade Building, and Culver Hotel, as well as buildings in Pasadena and Long Beach. Their office was located in Beverly Hills, California. By 1932, however, the firm had dissolved.

Claud Beelman was born in Ohio in 1884 and apprenticed in the Midwest and South before moving to Los Angeles. Once in Los Angeles he obtained his building license and went into partnership with Alexander Curlett, whose father was an established architect in the Los Angeles and San Francisco areas. Curlett was born in San Francisco in 1881, attended Columbia University's School of Architecture, and was in partnership with his father William Curlett from 1908-1916 as William Curlett and Son, Architects. After the firm Curlett & Beelman dissolved in 1932, Curlett became the project manager for the Federal Public Housing Authority and worked on federal building projects in Southern California until his death in 1942. Beelman continued as a solo architect, working on many commerical buildlings until his death in 1963. 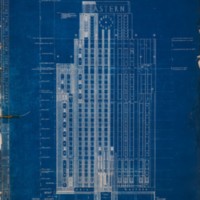 This exterior elevation of the Broadway side of the building displays the detailed calculations involved in designing and constructing a building of this size and complexity of exterior details. The exterior stonework is not specified for each window… 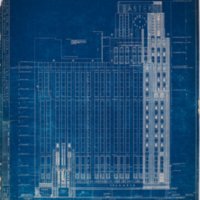 This view of the Ninth Street side of the building shows the second entrance to the lobby, just to the right of the Delivery entrance ramp. This ramp was a motorized vehicle entrance to the two-level basement, which was a delivery access point and… 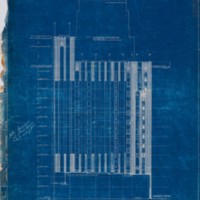 With other tall buildings flanking the Eastern Columbia building along the west and north sides, the detailed exterior elevations were not needed along the entire face of the side. In this western elevation, only the first three bays are noted as… 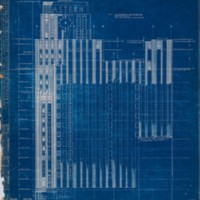 The north elevation of the building also abutted another tall building at the time of construction, so the detailed terra cotta workmanship along the north side only extends for two window bays before a plain blank wall is indicated on the plans.… 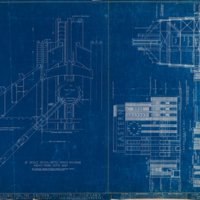 This sheet of drawings shows the clock tower face, section view of the tower, as well as the structural supports. The top of the building, with the word EASTERN emblazoned on all four sides along with the clock and its' distinctive blue and gold… 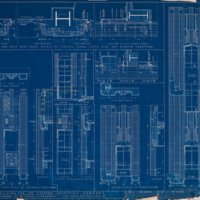 This sheet of very specific upper-floor terra cotta details highlights the specific measurements and design decorations used on both the tenth floor specifically, and on the upper floors in general. The sheet contains details, sections, and… 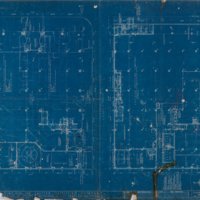 The first floor plan and basement plans shown on this sheet are the basic construction plans. The owner, Eastern Columbia Outfitting Company used their own designers to complete the interiors beyond what was outlined here. The first floor plan shows…
View all 7 items